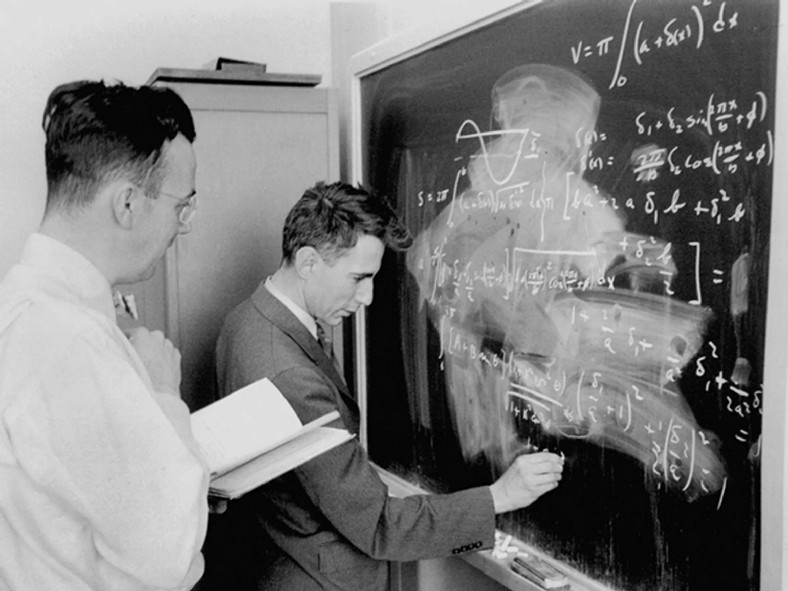 "This century is the equal in scientific progress of all the centuries that went before it, and I don’t see any slowing down." - Claude E. Shannon

There’s a great story about Claude E. Shannon, the eminent mathematician regarded as the father of information technology, that was recently shared with us. While giving a lecture one afternoon at Princeton’s Institute for Advanced Study, Albert Einstein, a fellow Professor of this fabled Institute, suddenly walks into the amphitheater, heads straight to the front to the amazement of the students, and murmurs something in Claude E. Shannon’s ear before briskly leaving the room. The students, startled and puzzled as to what wisdom Mr. Einstein, a theoretical physicist at the height of his international fame, could have possibly imparted to the mathematician Mr. Shannon, ask him to divulge the great words that must have just been exchanged. Mr. Shannon complies, and reveals that Mr. Einstein wanted to know where he could find the nearest restroom.

Even though this story is quite unfair to Mr. Shannon, whose insight, research, and work can be compared to Mr. Einstein’s in the profound way he helped shape our world (we highly recommend this excellent piece for a more detailed exploration of Mr. Shannon’s revolutionary work and legacy), we nevertheless thought it worthwhile to begin on this lighter note to contrast with the seemingly endless onslaught of macroeconomic headwinds that seem to augur a complicated period ahead. While the Federal Reserve has (finally!) decided it was time to try to rein in the runaway inflation by raising interest rates another 0.75%, leading the markets to make significant jumps forward, the general sentiment among many investors and consumers has reached lows not seen in more than a decade. Despite the cacophony of gloomy economic news, and the gyrations of the stock market, which have particularly impacted our beloved tech sector, the work to to build our tomorrow, which we remain extremely excited and optimistic about, must continue.

The trillion-dollar question is, of course, how far away this tomorrow is. The answer, we’re afraid, is a bit like the classic debate on the length of each day in the Biblical story of Genesis: it depends on whom you ask. Nevertheless, there’s a consensus that each day should be interpreted as a rather long period of time. Mark Zuckerberg jumped into this debate during Meta’s 1Q22 earnings call, sharing that in his view, Meta’s multibillion-dollar investment in the Reality Labs division, which generated a $2.8 billion loss in 2Q22, “is laying the groundwork for what I expect to be a very exciting 2030s when this is like — when this is sort of more established as the primary computing platform at that point.” That is thus one possibility for the realization of the utopic Metaverse vision, which is also in line with Intel’s Raja Koduri estimating that we may reach the Zettascale computing capacity he estimates necessary to power the Metaverse only by the end of the decade.

While 2030 is not a particularly convenient timeframe for most quarter-to-quarter-obsessed Wall Street analysts, it underlines the extent to which daily, and even weekly, market fluctuations are, for now, somewhat of a distraction to the bigger, longer-term objectives, and to the Herculean efforts underway by talented people across the world to get there. In this light, the great Benjamin Graham’s adage to “invest only if you would be comfortable owning a stock even if you had no way of knowing its daily share price” is a great reminder. Until then, wishing us all not necessarily smooth, but successful and happy sailings, ones that allow us to reach the immersive virtual shores, so that we may disembark, walk around, and marvel at all that will have been accomplished in just six, very long, days.

In light of the above discussion on the recent market volatility and the light distraction this poses to the longer-term work necessary to build out the utopian vision of the Metaverse, we will be modifying our weekly financial market updates so that, barring exceptions for exceptional events or developments, they include a combination of 52-week and year-to-date or month-to-date movements, which we believe tell a better story about the direction of the markets and individual companies we follow than their weekly stock market movements do. If you disagree (or if you agree) don't hesitate to let us know, as we continue working to perfect the format and presentation of these newsletters to make them as informative as possible. Needless to say, inclusion in this list is neither an implicit nor an explicit investment recommendation in any way.

NASA will stop in the Metaverse on its way to Mars

As it pursues its goal of one day sending humans to Mars, NASA recently launched a competition, open to the public, to build the best VR assets and scenarios to be used in research on extravehicular activities on the surface of Mars. Partnering up with Buendea, an immersive technology studio, and Epic Games, of Unreal Engine fame, NASA hopes that this call for submissions will help it better test procedures and conditions on the Red Planet. Its end goal is to create a more “immersive, engaging, and realistic experience,” which will be key to best anticipate, prepare, and train for the much-anticipated mission.

While quite small, with just $70,000 in prize money on offer for the best Martian universe designs, NASA’s involvement in this competition is quite significant, as it showcases and recalls the extent to which the Metaverse may be of service, across all industries, and for all types of users, including for astronauts. In fact, the creation of a fully immersive environment mimicking Mars is already well underway. In the competition description, NASA explains already having developed a MarsXR engine, built atop Unreal Engine 5, that includes 400 km2 of realistic, Mars terrain, and realistic weather conditions and Martian gravity.

The implication is that the Metaverse will not be staying within the exclusive purview of Silicon Valley technologists. While its development is likely to be greatly driven by them, most importantly because of their vision and their having the financial resources to back it, we are going to witness other government agencies beyond NASA and outside the U.S. start harnessing its power and discovering its boundless benefits. We have touched upon this in the past, such as during our discussion of the Metaverse’s potential implication in future diplomacy and international crisis situations. While we shouldn’t expect a fully-immersive virtual replica of Mars to be completed immediately (we leave it to James Cameron for now to bring us closest to another planet in December), the aspiring space travelers out there may soon have more good reasons to rejoice.

2022 is a Blockbuster Year for the Gaming Industry

The video game mergers and acquisitions market has just surpassed $100 billion in gross transaction volume, according to figures tracked by S&P Global, marking a major milestone as it cements a banner year that has broken myriad records for the industry. Leading the way was of course Microsoft’s $79.60 billion January acquisition of Activision Blizzard, followed by Take-Two’s same-month $13.55 billion acquisition of Zynga, and Sony’s $3.6 billion acquisition of Bungie. It would be inaccurate to justify the reasons for this record-breaking year in too simplistic a manner, but it’s clear that the Metaverse has been in the minds, Business Plans (and dreams?) of the senior executives making these major decisions. For more on this, and how we somehow compared Microsoft’s moves to Mr. Bean, you can review this previous newsletter.

As we contemplate what the next years look like for the industry, we took a look at Ernst & Young’s annual Gaming Industry Survey, where they dive into the minds of the industry’s executives. As EY puts it, “gaming companies are entering a new dimension, no longer bound by place, time or physical reality.” Interestingly, and unsurprisingly for an industry that is a first mover in the Metaverse, there appears to be near-unanimity among its leaders. Indeed, 97% of survey respondents believe that not only is gaming industry the center of the Metaverse now, but that companies across industries are going to establish a Metaverse presence. You can access the full survey which is filled with other insights here.

It is with the gaming industry’s dominant position in mind that the appetite and scope of M&A transactions in the sector can be looked at. As S&P Global highlights in its report, there are many more potential headline-grabbing M&A opportunities still available. As tech behemoths continue to vie for leading positions in the race to the Metaverse (we are eagerly anticipating Apple’s entry into the fold), we anticipate that it is quite likely that further such virtual eyebrow-raising headlines will hit the printing presses. And when they do, we’ll look forward to dive into them together.

We will be addressing the “deep philosophical competition” between Apple and Meta, and returning to our series on digital twins. We are also aiming to soon introduce you to some of the great companies working to address various needs in the Metaverse industry.

‍
We hope you enjoyed this newsletter. We truly love engaging with you, so hope you'll continue to feel free to pursue the conversation. You can contact us at team@metaobservations.com to share any feedback or questions.

Disclaimer: This newsletter is distributed for general informational and educational purposes only and the opinions expressed therein are never intended to constitute investment advice.