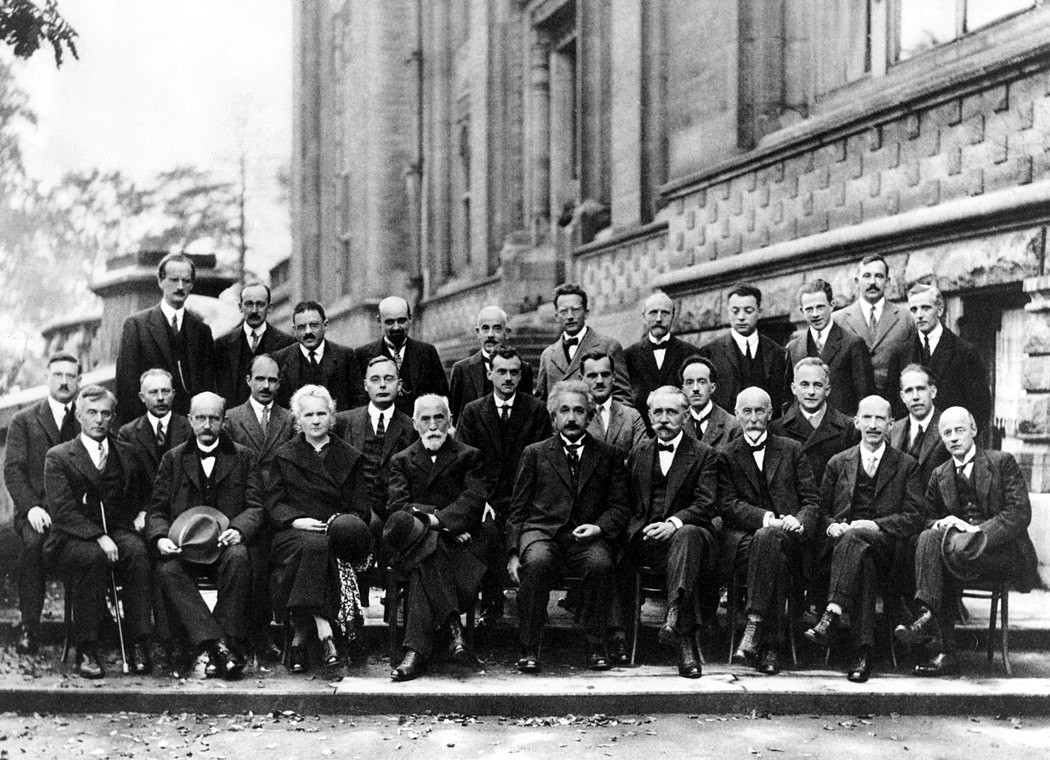 "The actual state of our knowledge is always provisional and…there must be, beyond what is actually known, immense new regions to discover." - Louie de Broglie

As summer comes to a close and schools begin returning to session, we bring you back to France one last time, on this occasion to the coastal Norman town of Dieppe. It is the year 1892, and the de Broglie family, which has for centuries been one of the country's most illustrious aristocratic families, has just welcomed their fifth child, Louie.

An evidently prodigious child, his family was projecting him to have a bright diplomatic career, thanks to his interest in history and politics. But life would have it differently, as Louie discovered the world of science while casually spending time with his brother, the physicist Maurice, in his laboratory. At the age of 21, he was drafted into the French WWI effort, serving as a telegraph operator on none other than the Eiffel Tower itself, a structure just three years older than him, and spent the next six years serving in the engineering forces.

Following the Great War, he focused his energy and mind on his passion, physics, and more specifically, electron waves. In 1924 he defended his dissertation on the topic, which was so original and important that it would lead to the creation of a new field, wave mechanics, which unites the theories of wave and matter, and to his being awarded the Nobel Prize in 1929. Louie de Broglie later was elected to Seat 1 of the Academie Francaise, a prestigious honor, and received immense recognition throughout his rich life.

It is helpful, when thinking about the ongoing development of the Metaverse, to recall the development of the wave mechanical model of the atom. De Broglie initially thought of particles as having the properties of waves. Meanwhile, Erwin Schrodinger, an Austrian-Irish phycisist, himself looked at electrons as standing waves. And at the same time, Werner Heisenberg, a German, developed his uncertainty principle about particles. Each of them was thus working on a concrete but distinct project to understand how particles behave.

Similarly, today, and every week, we share with you the latest technological advances from various companies working on different aspects of the project. Just like with the understanding of particles then, the ongoing work appears discombobulated, at best. We ceaselessly come across critiques of these firms, and of the very concept of the Metaverse. Opponents argue, sometimes elegantly and sometimes crudely that: it's a smokescreen, its so-called creators are all over the place, and it's a waste of their resources not only because they may never succeed in building what they have set their sights on, but because the world supposedly won't even want to use what they end up building, in all its confused, unconnected parts.

In 1927, the scientists we cited, de Broglie, Heisenberg, and Schrodinger, came together, alongside 26 other of the world's leading physicists, including Albert Einstein, Marie Curie, and Niels Bohr, at the Fifth Solvay Conference on Physics. In this gathering devoted to questions on Electrons and Photons, they worked on the newly developed quantum theory, which unified many of their disparate ideas, projects, and theories. In this most elegant unified theory, these great scientists brought together their distinct contributions to form a greater, more beautiful whole, which successfully describes and explains nature at the atomic level.

It is not because companies have distinct visions, projects, and priorities that the Metaverse will not come about. We argue that, in accordance with the Ricardian comparative advantage, it is best for each firm to focus on what it does best, to use its acquired specialties to concentrate on the part of the Metaverse that it can contribute the most to, whether in software, semiconductor, or hardware development. It may even be preferable that no single firm attempts to build the entire thing alone, for that is surely the wrong way to go about it. One day, the different parts of the puzzle that were conceived by different companies spanning the globe will all come together, like at the Solvay Conference, and unify into a cohesive and coherent global platform. This is our prediction because it's the natural and exclusive path to the realisation of the utopic vision of the Metaverse. The elusive question to which we don't have an answer to is when the '5th Solvay Conference' on the Metaverse is going to be able to take place.

The main influence on the recent stock market movement has been Federal Reserve Chairman Jerome Powell's address at Jackson Hole, Wyoming. Every year, the world's leading central bankers, economists, and policymakers gather at the pristine Grand Teton National Park not to hike, alas, but to discuss a specific economic topic that varies yearly, and also the general state of affairs.

The Fed Chairman gave an important address last Friday, where he confirmed his and the Fed's intention to keep fighting inflation, by maintaining high interest rate levels and shrinking its balance sheet, even if it causes potential "pain" in the coming months, such as by increasing the risk of a recession. By maintaining a firm stance to aggressively combat inflation, the Fed has sent shivers down the spine of short-term obsessed analysts, and thus led to significant drops in the stock market. Of course, we remain focused on the long term, and while there are trade-offs with this chosen route, we perceive the Fed's prioritizing combating inflation as being suitably geared for better longer-term economic health.

In a very interesting report, the Boston Consulting Group highlights just how widely the Metaverse will impact the rest of the technology, media, and telecommunication industry. The above chart illustrates their analysis and expected timeline. In the immediate to short term, they predict that the Metaverse is going to affect change in team-building and training efforts, for example, while in the longer-term holographic artists are going to become increasingly prevalent, significantly disrupting that industry. This analysis underscores the extent to which the Metaverse's tentacles will reach across a wide array of diverse applications and human experiences.

Sandbox: Not your Childhood's

Sandbox, the gaming platform owned by Animoca Brands, has just launched its Alpha Season 3, a 10-week period during which players can participate in 90 different experiences designed by many of its brand partners including Warner Music Group, The Smurfs, and Atari. By participating in these creative experiences, players can earn rewards, in the form of SAND, and compete for a spot on the leaderboard. This is the third time that Sandbox has developed this program that allows it, and its partners, to showcase their latest work. It's also a way for firms to show off their ability to innovate and participate in the Metaverse.

The story of the Sandbox is an interesting one, with roots in 2012 when it was created by Arthur Madrid and Sebastien Borger. We are tempted to go back even further than 2012, and to share with you the history of the sandbox itself, which originated in 1850 in Berlin's public parks, and were then known as "sand gardens." We are also tempted to recount how they were imported to America in 1885, to Boston's North End specifically, by a group of women philanthropists, who brought sand to a park because they believed that "playing in the dirt is the royalty of childhood." We are very tempted indeed. But we will resist, and just direct you to this fascinating article on the intellectual history of the sandbox for further fascinating reading.

The idea of a sandbox is similar to the idea behind Sandbox: allowing its participants to create their own games simply by providing them tools and a space to do so. The Sandbox is a platform for users to either participate in existing games or create their own and have other players join them. In the past few years, and particularly since its acquisition in 2018 by Animoca, there has been a marked acceleration in its pivot to integrate 3D elements, and to 'cryptofy' the platform, by adding NFT capabilities and developing its own token that's used as currency across the platform. The Sandbox has been particularly successful in attracting renowned brands and companies, since it gives them an ideal means to create their own customized virtual experiences without having to reinvent the wheel. This new Alpha Season 3 is a testament to that, and to the fact that we have come very far from that inaugural sandbox in 1880s Boston.