Metaverse Observations from the Pyrenees Mountains 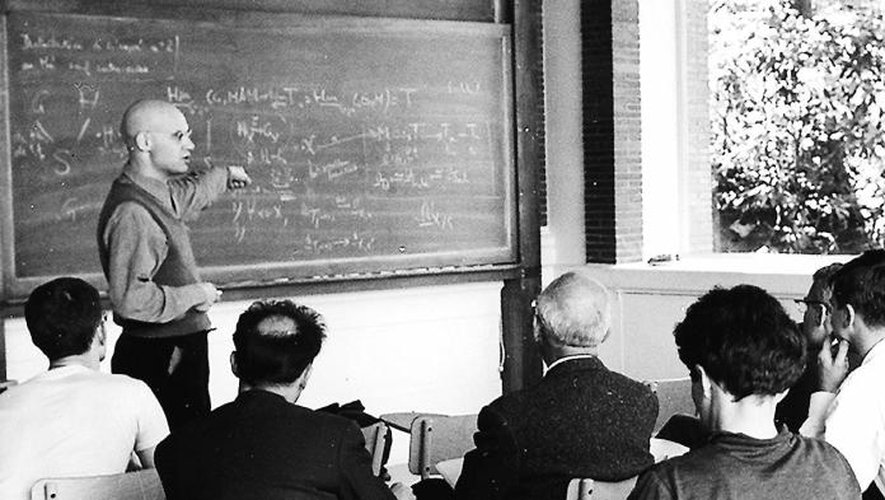 "Discovery is a child's privilege. He ignores the silent and flawless consensus that is part of the air we breathe - the consensus of all the people who are, or are reputed to be, reasonable." - Alexander Grothendieck

Sometimes, while in the research phase of this missive, we come across somebody whose accomplishments are beyond measure and whose life story is deeply noteworthy. And some of those times we feel the need to share it with you, particularly when their work or philosophy closely align with what is needed to build out the Metaverse. In that spirit, allow us to introduce the unique Alexander Grothendieck, regarded by many as the greatest mathematician of the 20th century.

Alexander Grothendieck was born in Berlin in 1928, but moved to France in 1933 with his family, who decided to flee Germany due to his father's Jewish roots. Unfortunately, his father could not have foreseen that France wouldn't be safe either, and he was nevertheless arrested by the French Vichy government in 1942. He was handed over by them to the Nazis, and sent to Auschwitz where he was murdered. Alexander Grothendieck himself was forced to hide, separately from his mother, in various French villages during the war, and occasionally had to flee to forests for days on end when Nazis descended on these villages, somehow managing to survive.

It's after the trauma of the World War, when his life was forever changed, that he began his studies in mathematics. For understandable reasons, he at first refused to take French nationality, and moved to São Paulo in 1953. In 1956, at the ripe age of 28, he was awarded the most prestigious mathematical prize in the world, the Fields Medal, for his work in algebraic geometry, which explores the relationships between equations and geometric spaces. He returned to France afterwards and worked at the Institut des Hautes Études Scientifiques, where he had his "golden age" of prolific work.

What makes Grothendieck so special is his approach to his work. The best summary of it is in his own words, taken from his autobiography Récoltes et semailles (or Harvests and sowings):

"Most mathematicians, as I mentioned earlier, are inclined to constrain themselves to a conceptual framework, a "universe" fixed once and for all - the one, essentially, which they have found "ready made" at the time of their studies. They are like the heirs of a large and beautiful fully-furnished house, with its lounges, kitchens, workshops, and its kitchenware and tools left and right, with which there is, I trust, plenty to cook and tinker. They mostly busy themselves with maintaining or embellishing a patrimony. More rarely, one of them will consider modifying one of the main tools, or even, under repeated and insistent pressure or need, to imagine and build a whole new tool. I feel that I belong to the lineage of mathematicians whose spontaneous vocation and joy was to continuously construct new houses."

This beautiful notion can be extended to various other fields, across all areas, including technology. In the same spirit as the introductory quote of this week's newsletter, major innovations and discoveries are not only hard, but exceedingly rare, for they require that unique ability to conjure up completely new houses instead of simply "maintaining or embellishing a patrimony." Mr. Grothendieck achieved in mathematics what is currently being sought in this revolutionary space that is the Metaverse. What the Metaverse proposes seems so clearly in defiance of our deep-rooted conceptual frameworks that it is challenging to not only believe in it, but to work on building it. Despite this difficulty, or because of it, that sort of creative, universe-breaking work is amongst the most exciting there can be.

Unfortunately, Grothendieck retired and strangely disappeared in 1991, cutting himself off from the world until his death in 2014. During those years, he lived in a small village at the foot of the Pyrenees mountain range, and relied on local villagers to sustain him. Even in that village, though, he continued working, tirelessly, and alone, on his mathematical research, and also spent time writing about religion, philosophy, and politics. In a wonderful article from just a few months ago that we recommend to those wishing to learn more about this rare personality, The New Yorker shares further insights about his intriguing and mysterious life. His lifetime's work, and unique ability to defy conventions and break open new universes, is an inspiration to those attempting to create new ones today.

A bit less inspiring than Grothendieck surely, but there is an interesting stock market story with regards to Roblox. Though the stock is still trading almost  60% lower year-to-date, it has gone up significantly since reaching a 52-week low of $21.65 in May. While it did not approach Bed Bath and Beyond's Meme-inspired frenzied surges, the stock still increased over 100% in the past few weeks, with a short squeeze playing a part. It's yet to be determined if any college students made $110 million on this trade as well, but Roblox has essentially retrieved its March 2021 IPO price of $45. Its 2Q22 earnings, while in the right direction, do not yet show that profitability is on the horizon. But expecting companies to be profitable is so 1934!

It was the selfie that was seen around the world. Last week, when Mark Zuckerberg excitedly shared the above picture to announce the launch of Horizon Worlds, its main virtual reality platform, in France and Spain, he did not think that…well, maybe he just did not think. Almost immediately after hitting "publish", a tidal wave, combined with a torrential rain, combined with an avalanche, and any other natural catastrophe metaphor you can think of, started to fall on him and the firm he founded and leads. The picture he posted, of admittedly very poor quality, was not inspiring, to say the least. Neither for the hundreds of millions of future users it seeks to bring onboard, nor the financial analysts and investors, wondering, in a quiet murmur, whether Meta's bet on the Metaverse will actually pay off, or whether it is a prelude to a downfall of epic proportions.

What is most surprising is that, after pouring more than $10 billion in this ambitious project to date, Mark Zuckerberg did not consider that posting a 1990s-level picture may not be perfectly conducive to making his case about the potential of the Metaverse. Evidently, the work to build the Metaverse is much bigger, and much more complex than rendering high-definition 2D pictures. Still, this cursed selfie has given fans and detractors alike a reason to ponder about the viability of the project.

The recent context is not helpful: the firm's cash-on-hand is starting to dwindle, as discussed in a previous newsletter, its revenues are decreasing for the first time ever (some credit given to Apple, a future competitor in the Metaverse space, which cleverly changed privacy settings of iPhone to the detriment of Meta), and the economic downturn does not help in the short-to-medium term. Thankfully, Meta realized its mistake, and Mr. Zuckerberg tried to correct course this week, releasing an updated, better picture along with the following explanation: "I know the photo I posted earlier this week was pretty basic - it was taken very quickly to celebrate a launch. The graphics in Horizon are capable of much more - even on headsets - and Horizon is improving very quickly." Unfortunately, damage has already been done. We wonder aloud: is Electronic Arts open to being acquired?

The above chart provides an insight into the success various brands have encountered so far generating revenues selling Non-Fungible-Tokens (NFTs). While we want to stay away from contributing to the often speculative behaviors that surround this up-and-coming asset class, if it may be called that, the above is noteworthy for showing that one brand, Nike, is outperforming every other brand. Indeed, while Nike has generated over $185.4 million in NFT revenues when combining its primary sales with its royalties on secondary sales, its closest rival, Dolce & Gabanna, has generated $25.7 million, or around seven times less. Rounding out the top five are Tiffany, Gucci, and Adidas, which shows the extent to which the luxury industry is emerging in this new market.

Nike's success can be traced back to its acquisition last December of RTFKT, the virtual sneakers company. It seems that this early acquisition has provided it with an early-mover advantage that will take time for its main competitor Adidas to catch up with. The lesson, perhaps, is that for brands looking to enter the virtual goods e-commerce economy, there may be some merit to considering mergers and acquisitions when those can help cement a first-mover advantage in a particular industry. The lesson is also to stay innovative. Last week we maybe unfairly poked fun at Time Magazine. We are impressed to see them on the sixth spot of this list, having generated $10 million in NFT revenues themselves, when they notoriously lost a big chunk of business in the past decade specifically for having failed to adapt to the internet in time. Perhaps Time (and time) will have the last laugh!

‍
We're excited to be featuring one of the exciting companies we have met and gotten to know in an upcoming newsletter. Stay tuned!